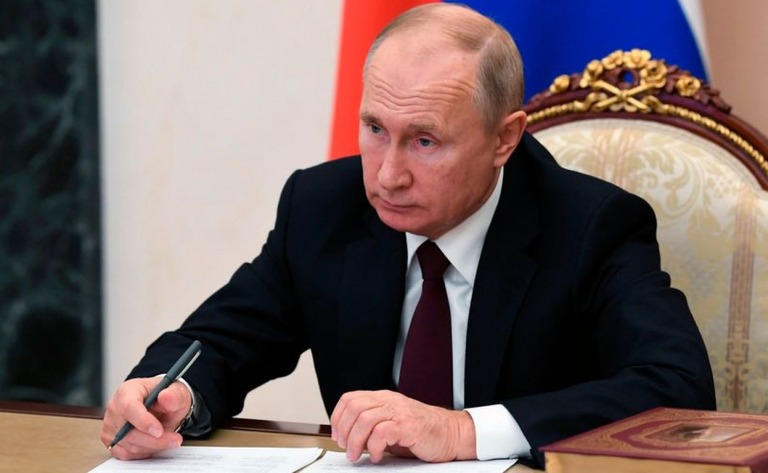 “Nobody listened to Russia,” Vladimir Putin intoned in 2018, as he unveiled the poisonous fruit of Russia’s military modernisation project: a nuclear-powered cruise missile; a hypersonic glider; and a nuclear warhead atop a drone submarine, designed to flood coastal cities with tsunamis. “Well, listen up now.”

Whether it’s new weapons, threatening nuclear war, or illegally invading sovereign states, Putin has a habit of seeking attention. In fact, it’s been his most predictable strategic reflex. Combining a thirst for great power status with a primitive nativism that has crossed over into xenophobia, Putin has consistently sought to compel others to respect Russia, though having them fear it will also apparently do.

But what sort of Russia will Putin leave behind for the millions of citizens at whose expense he has enriched himself, both personally and politically?

As his disastrous war in Ukraine demonstrates, Putin’s achievements embody anything but greatness. He will leave Russia geopolitically weakened, economically little more than a Chinese vassal, its people viewed with suspicion and hostility. Russia will have little more than a hefty nuclear arsenal and a disregard for the laws of war to coerce its neighbours.

For those reasons, future Russian historians are likely to view Putin with revulsion, not respect.

It’s worth recalling that Putin first came to power in 2000 on a wave of popular relief, not euphoria. For years, Russians had faced unappealing leadership choices: an increasingly ill and gaffe-prone Boris Yeltsin; the Communist Party’s dour Gennady Zyuganov; and Vladimir Zhirinovsky, the neofascist “clown prince” of Russian politics.

Unsurprisingly, Russians stoically but unenthusiastically voted for Yeltsin as president, but repeatedly elected rogues’ galleries of communists and nationalists (often called reds and browns) to Russia’s emasculated parliament as symbols of their discontent.

Enter Putin, who was plucked from obscurity by Yeltsin to become prime minister in August 1999. He soon became acting president when Yeltsin unexpectedly resigned on December 31.

In Putin, a population disillusioned with democracy and capitalism – which it blamed for economic shocks, rampant inflation and corruption, the war in Chechnya, a decline in life expectancy and a shrinking population – saw the promise of relative youth. With that also came a sense of optimism that there was an alternative future for Russia than slow sclerosis, a return to the bad old days of the USSR, or muscular fascism.

At first, Putin made few commitments: a vague notion of restoring Russia’s great power status, and a promise to clean up corruption.

Early in his tenure, pundits at home and abroad speculated about Putin the man. Did his shadowy KGB past hint at a preference for control, and ultimately dictatorship? Or did his role as chief of staff to the reformist mayor of St Petersburg, Anatoly Sobchak, suggest a democrat in disguise?

Of course, any doubts about Putin’s character have long since been expunged, save for a small number of his ardent Western supporters.

Placating Putin Has Emboldened Him

Yet it is worth recalling that the West has not just given Putin the benefit of the doubt on numerous occasions, but actively promoted him as a potential ally. Meeting Putin in June 2001, George W. Bush apparently “looked into his soul” and saw a trustworthy man. Tony Blair pushed hard (with Putin’s firm backing) for a new Russia-North Atlantic Council in 2002 to strengthen ties between Moscow and NATO members.

After those relationships soured over the war in Iraq, Putin progressively repressed domestic freedoms with formal legislation and black PR, moulded the media into a propaganda arm, imprisoned oligarchs, embarked on gas wars against Ukraine, renationalised the energy industry, foreshadowed his current ultranationalism at the 2007 Munich Security Conference, launched the five-day war against Georgia, and threatened the West with nuclear annihilation.

Even then, Barak Obama still attempted to “reset” relations with the Kremlin in 2009 and 2010, prompting Russians to joke that when you reset a computer you didn’t erase its memory.

Western attempts to socialise Putin should therefore have ended well before Russia’s seizure of Crimea in 2014. Yet the West responded with sanctions packages, reflecting an unwillingness to accept significant risks or costs. It then actively rewarded Putin with the opportunity to further extend Russian energy dominance in Europe – and the strategic leverage that came with it – via the Nordstream gas project.

The shooting down of flight MH17 by proxy Russian forces raised opprobrium, but no retributive justice. Nor did the poisonings of dissidents in Western capitals with fourth-generation chemical weapons, the horrendous conduct of Russian forces in Syria, or the Kremlin’s earnest attempts to polarise Western societies and interfere in their elections.

The dwindling ranks of those who support a softer line on Russia often justify Western behaviour with an odd sense of victor’s guilt, in which they see the West as partly culpable for Russia’s problems.

They are right, although not in the way they might expect. It is not enlarging NATO but placating Putin that has emboldened him to invade a sovereign state in the service of his imperial ambitions and throw Europe’s security order into turmoil. 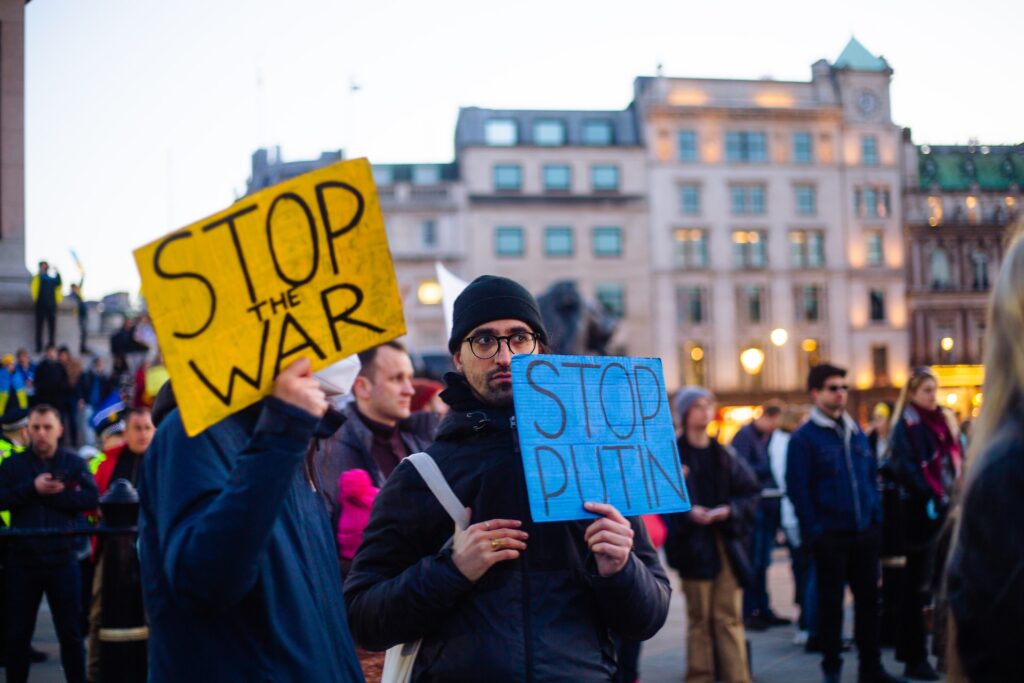 A House Of Cards

Ironically, Putin’s singular capacity to divide has assisted his success in uniting Russia. He recognises that human frailties – fear, mistrust, anger – can be weaponised to generate support and even legitimacy, albeit not one recognisable in pluralist societies.

He set Kremlin clans against one another, elevating and demoting them in games of super presidential sport. He encouraged victimhood by blaming Russia’s woes on moral decay in the West, American imperialism, liberals, “fascists”, Islamic terrorists, the Baltic states and Ukrainians.

He presented Russia’s oligarchs with a deal: they could continue to obscenely enrich themselves on the condition they stay out of politics. All the while he gradually shaped the apparatus of the state and society into a form in which he became the essence of all decisions, and the personification of Russian nationhood.

But, even in an autocracy, that only works provided there’s some good news to report.

For many of Putin’s presidencies, he was able to point to rising standards of living. Yet Russia’s structural inequalities have remained. In 2021, for instance, Russia’s 500 richest people controlled more wealth than the poorest 99.8% of the population.

That wealth is clustered in major cities. Russia’s ethnic minorities, save for local elites, are largely excluded.

Sanctions are also hurting. According to Andrei Illarionov, Putin’s former chief economic adviser, the number of Russians living in poverty will likely triple – to around one-third of the population. And an inability to diversify its economy will make Moscow beholden to Beijing as the main viable provider of capital to fund Russia’s extraction of energy and resources.

There is also no good news from the front lines. A combination of losses and defeats has made it harder to deny the scale of Russia’s military ineptitude. Having decried Ukrainians first as Nazis and then Satanists, Russia’s propagandists are now reduced to calling them ugly.

It is therefore increasingly evident that Putin has succeeded only in creating not a great power but a pre-modern petty state, characterised by fluid fiefdoms. He presides over a decaying and stratified society where wealth can be more precarious than poverty, where failure to intone whatever nonsense pours out of a cynical state media is grounds for suspicion and mistrust, and whose much-vaunted military might have been crippled by his own hubris.

Ultimately, Putin’s bequest to his people is grimness, not greatness. The next generation of Russians will be untrusted and unwanted in many of the world’s most prosperous and welcoming nations. Those who remain will be isolated, increasingly poor, and unable to shape their own destinies.

For all the suffering Putin and his people have inflicted on others, we should not be triumphant about that. On the contrary, we should lament it.