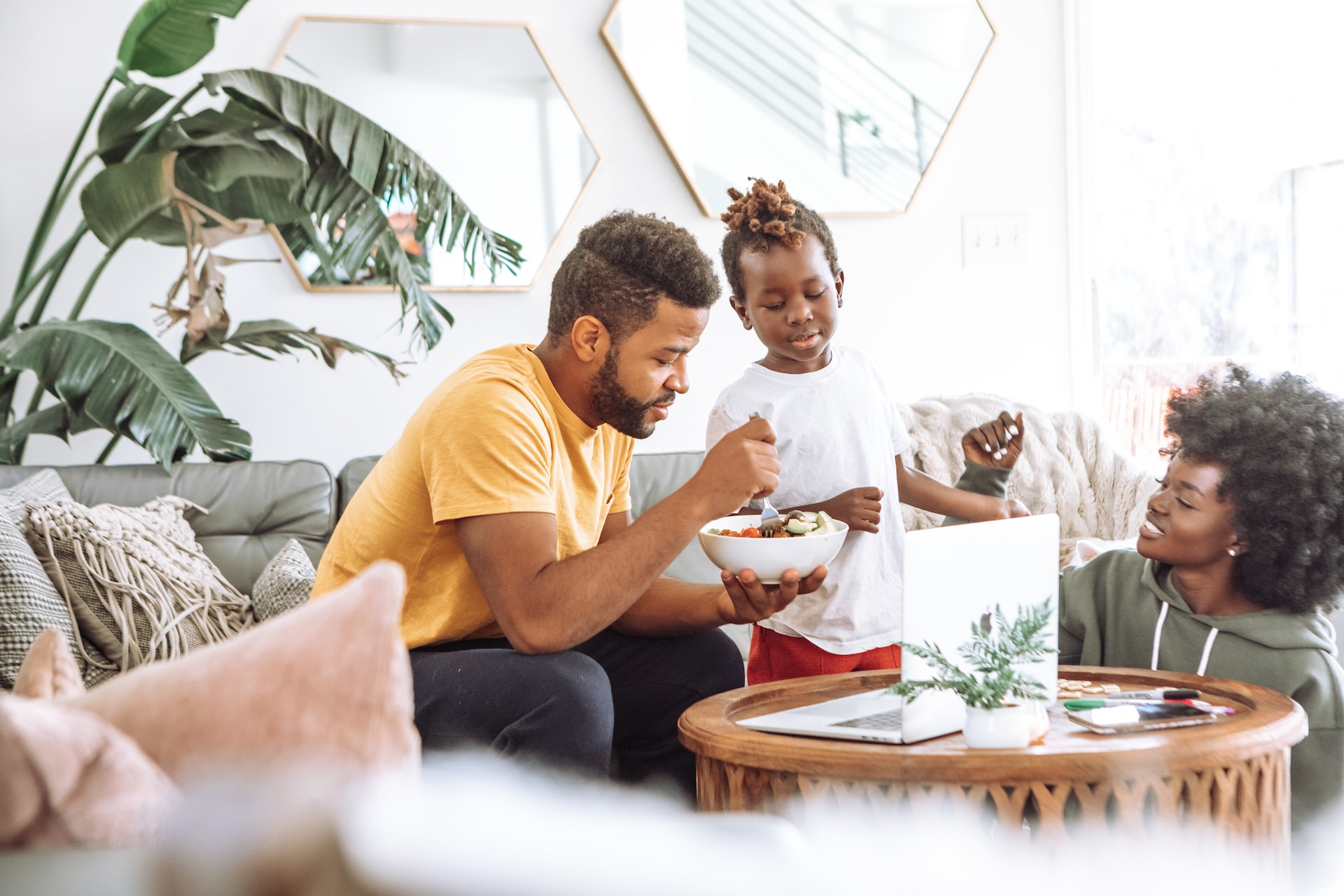 The Economy for the Common Good (ECG) is an alternative to the existing economic model of capitalism, including the pursuit of profit and constant growth. The ultimate goal is a good life for all people. The idea: the state supports companies that produce in an environmentally friendly way and pay their employees fairly. Through favorable loans and tax breaks, they receive a clear advantage and can thus operate even more successfully. Piece by piece, this could lead to a sustainable and socially just economic system.

Let’s imagine that a small café, a local carpentry shop, and a family bakery are suddenly more successful than the branches of large global corporations. The reason: the state supports them with favorable loans, investment aid, and tax breaks because they operate more sustainably, socially, and fairly. Corporations, on the other hand, have to pay higher taxes because they exploit their employees and destroy nature. This deliberately gives small businesses a clear advantage over corporations and enables them to assert themselves on the market with their fair and sustainable products.

A utopia? From today’s perspective, yes. But in the sense of the Economy for the Common Good, this is what our economic reality could look like.

Economy for the Common Good Explained: What is it?

The Economy for the Common Good (ECG) is an alternative to the existing economic model of capitalism. The primary goal is a good life for all people and not the maximum enrichment of a few company owners. It is an ethical market economy based on basic human values. The focus is on human dignity, solidarity and justice, ecological sustainability, transparency, and co-determination. Values are also shared by almost all democratic constitutions.

ONE OF THE STRENGTHS OF THE ECONOMY FOR THE COMMON GOOD IS THAT IT LINKS TO CORE ELEMENTS OF THE CAPITALIST MARKET ECONOMY: CORPORATIONS, CREDIT, TRADE, MARKETS, PROPERTY. HOWEVER, IT TRANSFORMS THESE ELEMENTS BY CONSISTENTLY PLACING THEM AT THE SERVICE OF OVERARCHING VALUES—HUMAN DIGNITY, SOLIDARITY, JUSTICE, SUSTAINABILITY, DEMOCRACY. IT IS THEREFORE TRANSFORMATION AND EVOLUTION, NOT “DISRUPTION” OR “SYSTEM CHANGE.” (CHRISTIAN FELBER, FOUNDER OF THE ECONOMY FOR THE COMMON GOOD)

These overarching values are only a proposal. The concept envisages that they will be (further) developed jointly in a democratic process.

The Economy for the Common Good understands sustainability as being, not only the resource-conserving use of nature but also respect for human dignity as well as free and successful economic activity as part of an ethical market economy.

ECG leads to more sustainability, as it promotes those companies that operate in an environmentally friendly and socially responsible manner. Through loans, investments, and tax breaks, they gain a clear advantage over others and thus prevail with their products on the market.

Following this simple principle, it would simply no longer be worthwhile to disregard human dignity, destroy the environment or drive inequality in society for the profit of a few. Step by step, this could lead to an economic system in which careful use of our finite resources pays off—while reckless and exploitative behavior does not.

Many people are now looking for meaningful work. Sustainability is particularly important—especially among the younger generation. This is another advantage for companies that focus on the common good: many of their employees feel significantly more satisfied as they see their work as making a contribution to the common good.

The “common good balance sheet” measures exactly how much a company contributes to the common good.

Through a new economic order and a fundamentally new way of thinking about business, the common good economy aims to achieve a good life for all. This is its ultimate goal. Everything is to be discussed anew and decided democratically:

The Economy for the Common Good wants to put control over our future back into the hands of democracy. An accumulation of capital, money, and consequently power should only be possible to a limited extent. Where this limit lies, all people should decide together.

The Common Good Balance Sheet: This Is How It Is Assessed

One of these companies is the sporting goods manufacturer Vaude. Vaude pays attention to the highest ecological standards in textile production. With the Common Good balance sheet, the company can measure the resulting contribution to the common good. 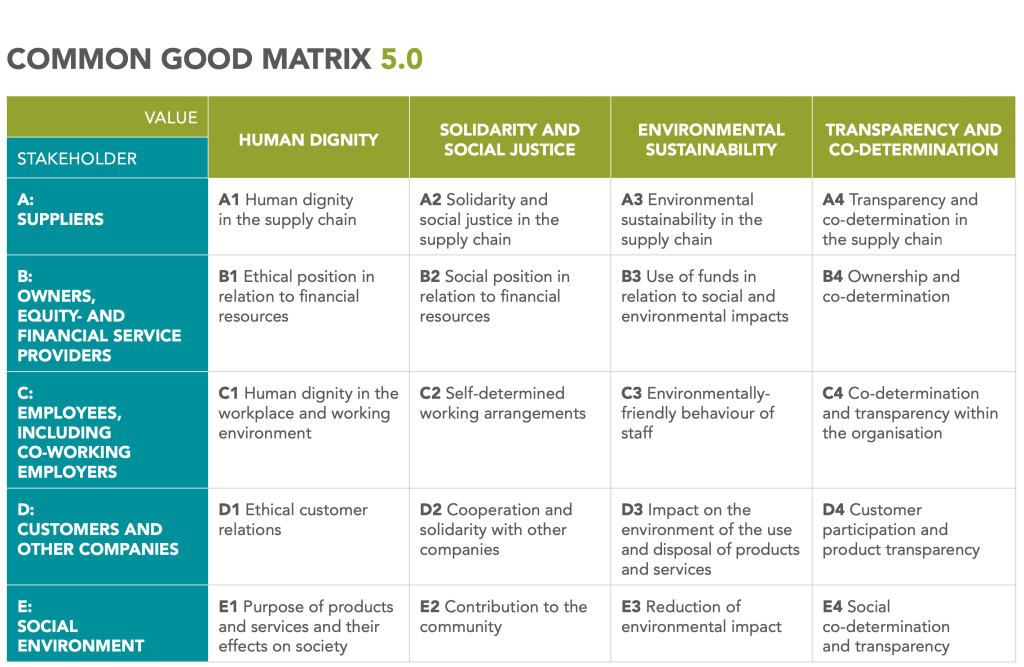 The Common Good Balance Sheet is based on the Common Good Matrix and rates companies in 20 categories with + or – points. Plus points are awarded, for example, for resource-conserving and environmentally friendly business practices, fair wages, and social working conditions. Minus points, on the other hand, are awarded for environmentally harmful behavior or disregard for human rights. The more plus points a company has, the more it contributes to the common good.

The Economy of the Common Good advocates that such a balance sheet would be mandatory for companies and, above all, would have legal and economic consequences. Companies with a high score would receive certain advantages, such as lower taxes, and more favorable investments, or would be given preference in the awarding of public contracts. This would create concrete incentives to operate and produce in a sustainable and socially responsible manner.

Around 1,000 companies in 35 countries are already drawing up a common good balance sheet and have decided to pursue social goals beyond mere profit maximization. These include well-known companies such as Vaude, Sonnentor, Windkraft Simonsfeld, the Trumer brewery, and the Freistadt brewery community.

Pros & Cons of the Economy of Common Good: Advantages and Disadvantages for Society

The basic values of the common good economy (human dignity, solidarity, justice, sustainability, and democracy) result in the following benefits:

Disadvantages would arise mainly for those who exploit the current situation and profit from the fact that people and the environment are exploited, that political influence is possible, and that there are no real consequences for it (yet).

The Economy for the Common Good: Examples

Worldwide, there are nearly 60 practicing cities and communities, 175 active regional groups, and 200 universities committed to the common good economy. These people have chosen it because they no longer want to watch large corporations destroy the environment and erode democracy. They want to see meaning in their work again, and working together for a better society gives them just that. The reasons and the examples for their commitment are numerous and could not be more different, but they all have one thing in common: dissatisfaction with the current situation and the will to change something.

Faced with the climate crisis, the gap between rich and poor, and the crisis of confidence in politics and democracy, transforming the current economic system towards a common good economy could defuse, if not solve, many global problems.

Constraints will result from this. However, these restrictions will not curtail our freedom but will set in motion a democratic process that can make all our lives better.